Violence against women is not specific to collectivist or conservative cultures, but it sure is easier for such cases to attract false justification in a country like Turkey. Recently, a 20-year-old student was killed and her body was burned by the murderers. The details are in this article. I have no idea who prepared the picture below, but I will translate each quote and explain them when necessary. 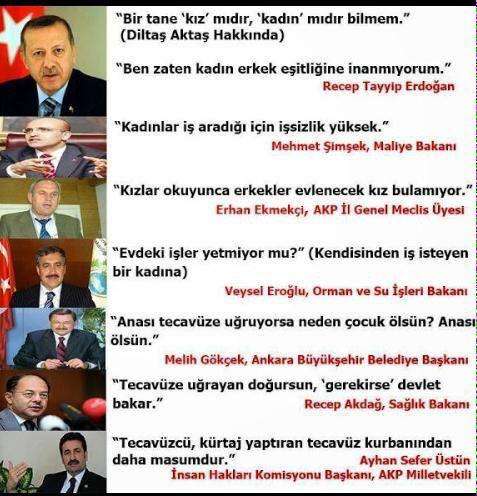 I don’t know if she is a woman or a girl. (Erdoğan)

Unemployment rate is high, because women are looking for jobs. (Şimşek, Minister of Finance)

This is one of the millions of comments by ‘men’ (and even MOST women in Turkey) about women in labour force. Most people (including women) think women should not work, and if there is unemployment, men should be hired first, as ‘men are the leaders of families who should bring bread to the table’.

Women have no function other than ‘wives’ or ‘mothers’ in Turkish culture. This is not only a comment by a politician, but a view supported by the vast majority of the population.

Is the work at home not enough? (Eroğlu, Minister of Forestry and Water Affairs)

…thus the minister asked a woman looking for work. This is worse than sexist jokes that suggest that ‘women belong to the kitchen’. In this collectivist culture, politicians are not just politicians. They are usually referred to as “devlet büyükleri” (roughly: elders of the state). These people, from whom we expect responsibility, go around sharing these ‘justifying’ opinions.

The following three quotes are about abortion, regarding the comments about pregnancies after rape. If you have a weak stomach, stop reading. These are truly disgusting.

If the mother had been raped, why should the child die? The mother should die. (Gökçek, Ankara Mayor)
If a person gets raped and becomes pregnant, the state will take care of the child if needed. (Akdağ, Minister of Health at the time)
A rapist is more innocent than a rape victim who chooses to have an abortion. (Üstün, Chairman of the Human Rights Commission, Member of Parliament, yes, AKP)

I am not trying to present a choice between the “public” and the “politician” here. They are mutually supportive. Politicians speak like this, they ARE this way, because they are representative of the majority in Turkey. The majority of the Turkish public cannot improve their “humanity” and become “normal people”, because politicians they love and respect keep reinforcing such ideas and approaches that are a thousand years old. Then they still get elected again for the parliament or local governments, or assigned to significant positions BECAUSE they support such approaches.

Özgecan Aslan was 20 years old. She was a university student. One day, she was by herself in a minibus (a very common way of transportation in Turkey). Three men, who later confessed to their crime, killed her and burned her body. She also “happened to be” an Alevi. If you know about the constant discrimination and terrible views against the Alevi population in Turkey, the comments on the internet will not surprise you. There were hundreds of such comments a few hours ago, and now there are probably thousands. I read a few dozens of them, but I will not bother with sources and the “speakers” as there are too many with the same views.

The rest of the arguments go like “they killed her BECAUSE…”, some trying to partly justify the murder, some supposedly trying to understand the motive behind the murder. The “condemning” comments are almost as bad. Roughly nine out of every ten “condemning” comments I read either literally begged for the death penalty to be brought back, or suggested that the public should make its own judgment and the murderers should be lynched, or burnt alive.

We cannot justify murder, rape or any kind of violence against anyone. It should be a “no-brainer”. For example, rape… Even water bottles and donkeys get raped in Turkey. Investigating into things like the time of the day a woman is walking in the streets, what she is wearing, her religion, etc. does not matter. Yet still, a rapist can get a reduced sentence “because the woman was dressed provocatively”. Many women get raped in this disgusting country. Many women get murdered. Many women are subjects of domestic violence. “These things happen everywhere around the world” argument is also invalid. Nothing justifies violence against women. It is NEVER a woman’s fault to be a victim. It is just disgusting that we still have to make this point in the year 2015.

I am not expecting an extraordinary amount of kindness and humanity from these cave-men that, let us be honest, constitute the majority of this country. I just hope they will learn the most basic, simplest things every human being should follow. Immediately trying to find reasons for or justify violence, rape, or inhuman behaviour is not one of such things. I just hope these cave-men can learn how to be “normal” human beings as soon as possible.

Did you notice something while reading this article? Up to now, I never mentioned that Özgecan Aslan was also raped. Nor did many of the news articles. But be honest, you immediately know that she was raped. We are now at a point where we take rape as a “given” in any story of this kind. Think about it.

I am also not even sorry for the spelling mistakes or grammatical errors in this article, if there are any.

This site uses Akismet to reduce spam. Learn how your comment data is processed.